Learn about the Brush-tailed Rock-wallaby

The Brush-tailed Rock-wallaby (BTRW) is small and usually found in very rocky terrain. They are mostly brown with grey shoulders, a reddish-brown rump and short dark feet. They get their name from their long, dark, thick tail as it ends in a brushy tip. They are difficult to spot, but they can be seen along rocky escarpments, in boulder piles and on rocky outcrops. Generally their habitat has numerous crevices, subterranean passageways, ledges and overhangs for shelter and safety. They also prefer north facing sites, as they sun themselves in the morning and afternoon.

The Brush-tailed Rock-wallaby (BTRW) is a small wallaby, with adults weighing approximately 5-8kg. They are generally brown with grey shoulders, a reddish-brown rump and short dark feet. Their tail is long (normally longer than their body length), dark, thick and ends in a brushy tip. They have a white cheek stripe and a black dorsal stripe from the eyes to the back of the head.

Brush-tailed Rock-wallabies can be found in a variety of habitats, from rainforests to open woodland, and are extremely agile animals. They dwell in very rocky terrain, such as along rocky escarpments and in boulder piles and rocky outcrops. They require numerous crevices, subterranean passageways, ledges and overhangs for shelter and safety. They prefer north facing sites as they sun themselves in the morning and afternoon.

Rock-wallabies are difficult to spot because of their camouflaged nature and the terrain in which they live. Often, the best evidence of their presence is their droppings, as they are easy to identify. They are cylindrical in shape, with a small point at one end.

They feed on a wide variety of grasses, as well as small herbs, leaves, flowers, fruits and bark.

The species has a range from Queensland to Victoria, roughly following the line of the Great Dividing Range. In NSW, the Shoalhaven is the most southern population, and the Warrumbungle Ranges is the western limit. There has been a decline in numbers and a reduction in range. In southern NSW and in Victoria, they are now highly fragmented, with small isolated populations dotted across the former range. Brush-tailed Rock-wallabies are listed as endangered in NSW, critically endangered in Victoria, and vulnerable in Queensland. Recovery plans have been developed for both the NSW and Victorian animals to assist in species management and recovery.

Predation by foxes has most often been cited as the primary threat to Brush-tailed Rock-wallabies, as detailed in the NSW Fox Threat Abatement Plan.

The conservation of many threatened species, including the Brush-tailed Rock-wallaby, is very dependent on community support and involvement. We all know that shaping a sustainable future starts now, and is the responsibility of everyone.

This education program is intended to develop students’ respect for biodiversity and appreciation of the role of science, monitoring and technology in continually building our understanding of the complex world we live in.

Our hope is to inspire students to actively participate in local biodiversity conservation initiatives, continually expand and communicate their knowledge, and to engage in ethical decision-making and consumption.

The Friends’ Primary and Secondary School Education Programs are developed and implemented by National Parks and Wildlife Service staff who have over 10 years experience in environmental education and threatened species management.

Members receive regular updates via a newsletter about the activities of the Friends as well as the progress of the Shoalhaven Rock-wallaby colonies. We keep copies of our released newsletters that can be read at any time.

Your generous donation is very important to us, to help preserve a threatened species. 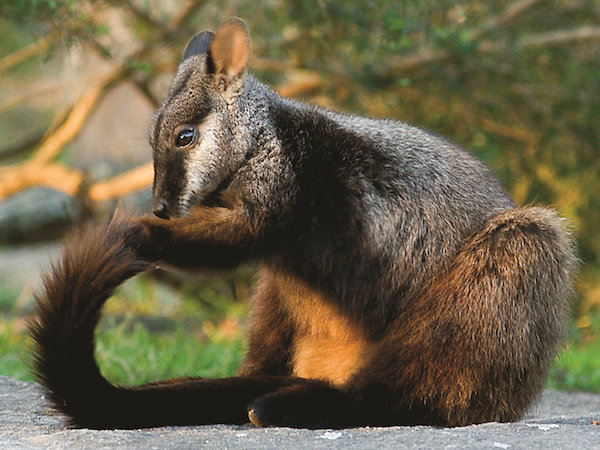 Help keep us running so that we can help our Brush-tailed Rock-wallaby colonies recover.

Friends of the Brush-tailed Rock-wallaby

A non-profit group providing support for and fostering public awareness of the Brush-tailed Rock-wallaby. Learn more or contact us.

Help us help them

Learn about the Brush-tailed Rock-wallaby

Documentary – 'On The Edge'